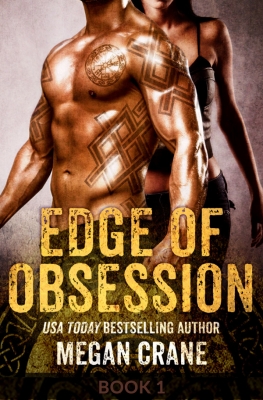 Book 1 in the Edge Series

Tyr, a powerful man in a ravaged world, needs only three things to survive:

But when a beautiful prisoner grabs his attention during a mission to restock his clan’s supplies, Tyr’s alpha instincts give way to something much darker–strong, unquenchable craving that cannot be ignored…or denied.

After two years on the run, Helena is snared by this powerful clan of hardware-wielding, tattooed, steel-eyed raider warriors who roam the land unchallenged. Strong to her core and with a mission of her own, Helena knows she doesn’t have to be their captive for long.

However, despite all the terrible things she’s heard about these brutal beasts, Helena is overcome by intense desire for the one ruthless man who has taken her. As their passion escalates, Helena will have to trust in Tyr in order to save both what’s left of this desolate, torn-up world…and herself.

*Features a dominating hero, graphic, steamy sex, and a happily ever after. 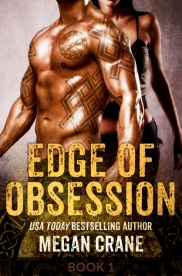 She frowned at him. “Why do you keep asking me that? Do you have a thing about feet?”

Tyr almost smiled at that. “Don’t worry, little girl. You’re not going to have to ask what I’m into. You’ll know.” He watched her eyes widen and those nipples harden all over again, like they were begging for his mouth. “Was that a yes?”

Helena studied him, wrapping her arms around herself, either because she was cold or because she was scared, and he was enough of a dick that he didn’t really care which, because he could see that she was also turned on.

“Yes,” she said after a moment, her voice subdued, like it had been another fight inside of her to admit something he already knew was true. “They’re a little banged up.”

“The question you should be asking, sweetheart, is why you didn’t ask for help when you realized I expected you to walk on bare feet through the woods in the middle of the night. I’m a raider. I’m betting it crossed your mind we were heading for the water. You knew it was going to be more than a five minute stroll.”

Her arms tightened there across her middle, and that fuck you gleam in her eyes was perfect. She was the least tough thing he’d ever seen, naked and slender and dripping wet with the wind slapping at her, and she was still braver than every last moron at that compound. How could Tyr not love that shit?

“The next time I’m abducted and literally carted off over the shoulder of a terrifying man covered in blood and a selection of very sharp blades,” she said in that edgy voice of hers that made his pulse roar at him, “I’ll be sure to stop and demand that my captor provide me with adequate footwear for the forced march in the darkness.”

“You don’t ask for help, guess what? You don't get any. This is a raider camp, not a nursery, and it’s even harsher back home on the islands.” He considered the goose bumps rising all over her, imagined the sting of the wind on her tender flesh after the warmer seawater. “Do you want to dry yourself off, Helena?”

And she was never boring, this one. She scowled at him, even harder than before, and she thought about it. He could see the calculation in her gaze, the way she took the measure of him—keeping her compliant eyes above the waist, he noticed to his amusement—and then, when she’d started to edge toward actually shivering from the cold, she cleared her throat.

“What are my options?”

Tyr had assumed she’d outright surrender to get out of the wind, like every other woman he’d ever met would have—and a lot sooner. That she hadn’t done that made his cock so hard it bordered on pain.

He shrugged. “You can take this and use it as a towel or you can go up there and warm yourself by the fire.”

Tyr could have stood there all night, watching her grey eyes move from her wet clothes hanging over his shoulder to the wool wrap in his fist to the bag at his feet. Especially because her eyes blazed with fury and resentment when they finally met his again.

“Thank you,” she said in that same snotty tone she’d used in the woods. “I’d love to use your towel.”

He laughed at that and moved closer to her, draping the wool over her shoulders and then wrapping around her so it covered at much of her as possible. As he pulled it tight, he got his mouth near her ear.

“I keep telling you to watch that mouth,” he growled, and saw the new and different set of goose bumps that shivered to life at the sound of his words. “Next step is me watching it for you. Think you’ll like that?” He laughed again when she shuddered against him. “Because I know I will.”

A sexy, drag me to your cave and do what you wanna, read!

This read was so sexy, and steamy and just swoon worthy! I’m pretty sure my kindle nearly combusted!

4 stars! I look forward to the next, there will be a next, right?

Wow, what a read! This was something completely else from what I usually read, and let me tell you I don’t regret it one bit! The story is a mix of dystopia and freaking vikings, I kid you not. It’s genius!

This caveman style type of book just comes around too few times for my liking. Barbarians…..check. Hot alpha male…. Check. Chick who needs dragging back to lair…. Check. Loved it. Had that end of times drama but well worth the read in my opinion. One of my top ten for this month anyways. I was drawn into a unique storyline and the characters had fabulous chemistry. Five stars.

Well what a bloody hot little number this was!

…I can safely say I have never read a book like this before and it was really great. 5 HUGE twinkling stars!

Wow…this one had me on the edge of my seat and up into the wee hours of the morning. I could not put it down!

At first I thought “Mad Max” and then I thought nope…seafaring raiders…and then… I just kept reading and reading. When I finished and thought about it this morning I thought of the first books I read by John Wyndham and realized I have enjoyed reading about a world destroyed and trying to recover since I read the Wyndham Omnibus years ago.

…This story is about trust, dispelling misconceptions, power – the abuse of it versus the wise use of it, family and oh so much more. I loved it!

Edge Of Obsession was different from anything I’d read lately. It definitely captured my interest. This riveting story, the dystopian setting, and the vivid characters were unique and kept me spellbound until the end.

This was a great book. The worldbuilding was excellent. The characters were wonderful. It made me want to read more about everyone in the story. So this book is definitely a winner for me.