Book 2 in the Edge Series

Gunnar is a ruined man in a desolate world.

Though he does not believe in black magic, if there’s the chance it might bring back his lost mate from her early death, he’ll try it. For the doomed spell to work, all he needs to capture is a virgin.

Maud was promised to the church a long time ago, though she has never felt like she belonged. She is still an innocent, but her heart has always been too rebellious. Her curiosity and her desires are too…powerful.

Yet when she encounters brooding, ruthless Gunnar, the sexual tension that flares between them obliterates any sense of duty. She’s managed to avoid surrender all these holy years. Her very soul has depended on it. But Gunnar’s iron control makes her want nothing more than to bare her heart, and submit to him completely… 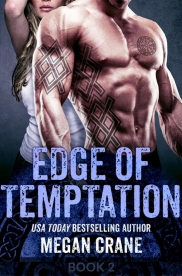 It occurred to Maud that even here, with her feet dunked in a river in Wyoming in the middle of nowhere, she expected Bishop Seph to appear the way he always did. To rise up out of the stones and demand his usual accounting of every wicked thought in her head and dark urge in her heart, the better to hurt her with later.

But her fierce raider wouldn’t have left her here if he’d believed someone would find her. Maud didn’t know how she knew that or why she was certain that was true, no matter the things he’d said to her or that shattering way he’d looked at her before he’d left.

The word master seemed to shimmer in the air all around her like a different kind of heat.

Maud forced herself to breathe. To let go of the life she’d left behind and the slow, steady, predictable progression of the days in the convent she’d been so sure she hated. One indistinguishable from the next. Classes and work, prayers and chants. She breathed it in, her former life, and blew it out again into the river as it passed. And slowly, surely, that heavy ache inside of her eased.

Maybe for the first time in a long, long while.

She was still sitting there, in much the same position, when he returned some time later. The sun had inched even higher into the sky and beat down from directly overhead, and the river water had warmed along with it. She flexed her feet to cause a little resistance, then let the water surge around them. Over and over, until it became a kind of prayer all its own. Flex, release. Water and sun.

Maud didn’t hear him approach. One moment she was staring dreamily at the water as it surged around a stone and the next there was a prickling sensation stretching up and down her back, warning her she wasn’t alone.

She shifted to look over her shoulder and there he was, her raider. Gunnar. She thought the name fit him. He looked hard and terrible and infinitely tempting as he stood some distance away on the riverbank, those smoky eyes on her.

He lifted his chin at her and she obeyed him without thinking, that word he’d used earlier dancing down the length of her spine. Master. She rose to her feet and made her way to shore, rock by rock, and he was there to meet her when she finally made the last little jump to the soft earth.

He still wore his hat and the shirt that slicked all over his chest and her mouth watered. He didn’t smile. She wondered if he ever smiled, but for once she had the sense not to let her mouth run away with her. She wanted to ask him a thousand things, but everything had changed in the cab of his vehicle before he’d left. It still hung there between them, making even a simple thing like Maud standing there before him in her bare feet feel . . . seductive and dangerous at once. Huge and precarious, as if she was balanced on the narrow edge of a very steep cliff.

He held a bundle of clothes in his hands and he dropped them on the ground between them. Then he simply . . . waited. He looked like a terrible god, expectant and harsh. He looked beautiful. He looked cruel in a way that made her pussy swell and her breasts start to ache, and it hit her, then. It wasn’t the shirt or the word he’d used or anything he was doing. It was the light.

He’d been overwhelming in the moonlight. He loomed larger than the desert in her memory. But the sun made him something else again. Harder. Haunted. Grim and gorgeous, and his massive body right there in front of her made Maud feel fluttery. Everywhere.

“You bought me clothes?” she asked.

His blue eyes were like smoke. “We can pretend I bought them if you want.”

Maud looked at the bundle, then back at him, something restless and wonderful flashing over her as possibilities chased each other through her head. “Did you raid something to get them?”

“Raids generally involve a battle. Some reason to draw a blade and an opponent worth the swing.” He indicated that big, square mountain in the distance with a nod of his head. “That’s nothing but a way station. A little town of weaklings who lost the will to go anywhere else, so hunkered down here instead.”

Maud was aware of everything. The sun above. The rush of the river behind her. The solid, squat mountain in the distance and the sweet smell of some kind of flower she’d never encountered before perfuming the breeze that seemed to sweep down from the stone heights.

And none of that seemed as real as the powerful man who still stood there before her, every part of him taut and hard and rock solid. Or that gaze of his that was a bolt of sensation through her, lighting her up and making her hair feel as if it should stand on end. Maybe it did. She couldn’t look away from him long enough to find out.

“Maud.” Was he whispering her name? Or was it that she couldn’t really hear him over the blood in her ears and the roar in her head? “You need to put on your clothes.”

Edgy, intense, raw, enthralling, and sexy (that word doesn’t even cover the basics). The author crafted a beautifully stark and violent world and populated it with compelling and rich characters. I can not remember ever being so invested in a book. I was appalled and entranced; shocked and titillated. Wow, wow,wow! Huge fan and you can bet I’m grabbing up the rest of her books.

Intense, gritty and so sexually charged, it sets the pages on fire!

…The dynamics between the lead characters is often raw and inescapably appealing, with Gunnar’s rough, pitiless nature and Maud’s quirky honesty, and engaging personality. I am definitely hooked on this powerful and passionate series!

This book is as intense as it is dirty and that is what made is so much fun to read. Right from the start I was swept away into this fast-paced and electric ride, enjoying all the twists and turns that came at me. Edge of Temptationwas a wonderful addition to this gritty series and I continue to be intrigued and am looking forward to more!

Loved Maud and Gunnar!! The story was unlike anything else I’ve read. Any romance or sci-fi/fantasy fan needs to add this book to their must read list!

This is a great follow up to book 1 and I liked that it was different in its own way. It’s still the same dark and harsh world, but Gunnar and Maud are not recycled characters. They’re very unique and very complicated.

I was captured by this book just as much as Maud and Gunnar were by one another. Maud may have been Gunnar’s captive but by the end of the book he was just as much her captive as she was his. This was a steamy read that was definitely not vanilla in flavor. I enjoyed the strength of Maud and her ability to see Gunnar and help him to see himself again.

I loved all the Viking books I read and always wanted and craved something like this. I would definitely recommend reading this series.