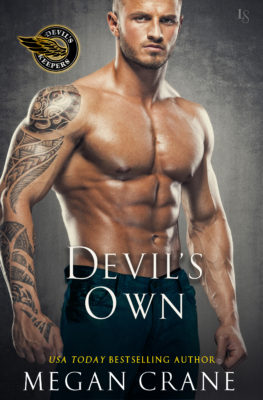 Story Told: Devil’s Own
Book 3 in the Devil's Keepers Series

Chaser is an ex-Marine and the DKMC’s foremost enforcer who happily puts the grim in grim reaper, should you be dumb enough to merit a visit. After his junkie ex stole his daughter, he spent six years searching for little Kaylee and the six years since not really getting over that shit. The last thing he needs is some “concerned” schoolteacher getting in his face about Kaylee’s behavior.

Though the way Ms. Lara Ashburn gets in his face, he might just have to re-think his position on snooty, uptight do-gooders…

Bike: Has several custom Choppers; likes to work on them and make them particularly badass.

Dislikes: Do-gooders, being lied to, his junkie ex.