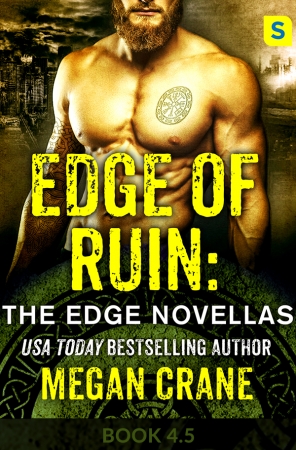 In this scorching boxed set of brand-new novellas by USA Today bestselling author Megan Crane, the ultimate Viking warriors rule a future, destroyed world with the force of will alone. But now, they will meet the women who will change…everything.

Tait has laid claim to the fearsome reputation of raider. His overwhelming presence and fierce sexual prowess makes people both burn for his touch and cower in his wake. Elenthea has spent her whole life on the Raft, a floating city known for being much safer than the ravaged land. But when Raft politics leave Elenthea a breath away from stranded in the sea, she turns to the blisteringly hot warrior to help secure her place on land. But will this bargain of survival be consumed by passion?

Matylda felt she had no choice but to become a mail order bride, but Zavier isn’t at all what she expected. He’s dark and forbidding, and his sexual expectations are demanding… and hungry. Very, very hungry. It isn’t long before Matylda finds herself more than a little addicted to her mail order husband’s touch… but he has the option to trade her in at the March equinox. Will he return her like every other bride before her? Or will this commanding raider keep his explosively passionate mail order bride?

Mighty warrior Jurin stepped up and claimed Melyssa’s baby when she first came to the clan. As kind as he is fierce, as gentle as he is brutal, Jurin took a vow to act as friend and father to Melyssa’s family. But doing so means ignoring the surge of sensual awareness that simmers barely repressed between them, and soon Jurin must decide whether to play the role of distant protector— or claim her as his woman for good…