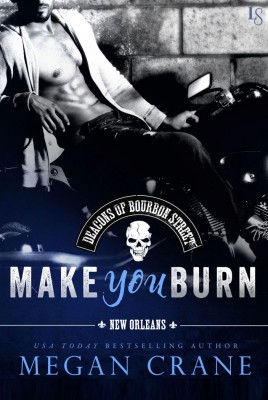 Ajax spent ten years in exile and now that Priest, the old president of his MC and his surrogate father, is dead, well. There’s no place like home.

He’s ready to be back in New Orleans. He’s ready to figure out what happened to Priest, take over the once mighty Deacons of Bourbon Street MC he was honored to serve as its VP, and while he’s at it, return the club he loves to its former glory with the help of the three brothers he was exiled with.

Ajax is used to getting what he wants.

Including Priest’s little girl. The last time Ajax saw her she was in her Catholic school girl uniform ten years ago and completely off-limits.

But Sophie’s all grown up now.

And what Ajax wants, Ajax takes…

Likes: His club. Deacons forever. And yeah, the one woman he should keep his hands off of...

Dislikes: Club enemies, old drama, and the shape the Deacons are in after ten years... but he aims to fix that.