This is the 2nd book in the Harlequin Notorious Wolfes continuity! 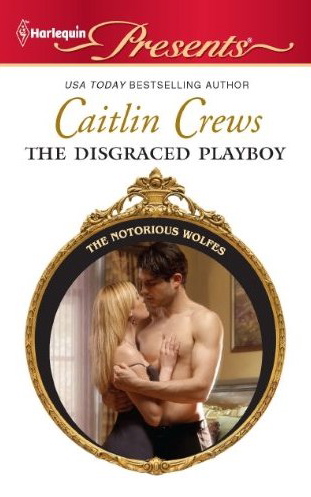 Notorious playboy Lucas Wolfe revels in living decadently. Women fall at his feet and into his bed, and he unashamedly leaves a trail of broken hearts behind him.

Deciding to confront his past — and his self-destructive lifestyle — Lucas returns home to accept a job at his family’s company and to finally give respectability a go. Except, sparks fly when he meets co-worker and corporate success, Grace Carter.

Grace knows the uncontrollable Lucas could ruin her career, and she won’t tolerate his wayward behaviour — despite their chemistry. But working with Lucas is thrilling, and after just a small dose of his magic, even Grace’s prim–and–proper shell begins to splinter… 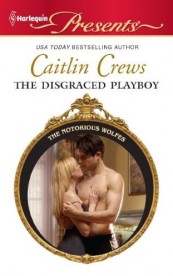 Grace Carter glanced up from her computer, frowning at the figure that sauntered so confidently into her office high above the cold, wet February streets of central London, without so much as a knock on her door as warning.

And then she went very still in her chair. Something that felt like fire rolled through her, scorching everything in its path. She told herself it was indignation because he had failed to knock as any decent, polite person should—but she knew better.

"Good morning," he said in a low, richly amused and somehow knowing voice that seemed to echo inside of her. He seemed to smolder there in front of her, like a banked flame. She straightened in her seat in reaction.

He was dressed in a sharp, sleek Italian suit that clung to the hard planes of his celebrated body and looked far too fashion–forward for the staid and storied halls of Hartington's, one of Britain's oldest luxury department stores, where conservative was the watchword in word, deed and staff apparel. His too–long dark chocolate hair was tousled and unkempt—rather deliberately so, Grace thought uncharitably—and fell toward his remarkable green eyes, one of which was ringed by a darkening bruise. It matched the split lip that failed, somehow, to dampen the impact of his shockingly carnal mouth. His cuts and bruises gave him a faintly roguish air and added to the man's already outrageous appeal. And well he knew it.

"Thank you," he said, those famous green eyes bright with amusement, quite as if her invitation was sincere. His decadent mouth crooked to the side. "Is that an invitation into your office or, one can only hope, somewhere infinitely more exciting?"

Grace wished she did not recognize him, but she did—and this was not the first time she'd seen him in person. Not that anyone alive could fail to identify him on sight, with a face that was usually plastered across at least one or two tabloids weekly, in every country in the world. Showcasing exactly this kind of inappropriate behavior.

She was not impressed.

"Lucas Wolfe," she said, as a gesture toward good manners, though her voice was flat.

He was Lucas Wolfe, second son of the late, notoriously flamboyant William Wolfe, darling of the paparazzi, famously faithless lover to hordes of equally rich and supernaturally beautiful women—and Grace could not think of a single reason why this creature of tabloids and lore should be standing in her office on a regular Thursday morning, gazing at her in a manner that could only be called expectant.

"All six resplendent feet and then some," he drawled, his dark brows arching high above his wicked green eyes. "At your service."

"You are Lucas Wolfe," she said, ignoring the innuendo that seemed to infuse his voice, his expression, like some kind of molten chocolate. "And I'm afraid I am busy. Can I direct you to someone who can help you?"

"Too busy for my charm and beauty?" he asked, that wicked grin making his eyes gleam, his expression somewhere between suggestive and irrepressible—and surprisingly infectious. Grace had to fight to keep from smiling automatically in return. "Surely not. That would require hell to freeze over, for a start."

She ignored him, rising to her feet to regain the appropriate balance of power.

"I would invite you make yourself comfortable," she said with a tight smile, close enough to courteous, knowing her voice would make the words sound sweeter than they were, "except that seems rather redundant, doesn't it?"

Every instinct she had screamed at her to let this man know exactly what she thought of his kind. Womanizing, useless, parasitic, just like all the men her poor mother had paraded in and out of their trailer when Grace was a child. Just like the father she'd never met, who from all accounts was yet one more pretty, irresponsible wastrel in a long line of the same. Just like every other idiot she'd had to slap down over the years.

But as a member of the Wolfe family Lucas was considered royalty at Hartington's, given that his family had once owned the company. The Wolfes might not own Hartington's any longer, but Hartington's board of directors loved to play up the connection—and as the events manager who was in charge of Hartington's centenary relaunch in a matter of weeks, Grace was expected to act in Hartington's best interests at all times no matter the cost to herself.

"I am always comfortable," he assured her, his voice a symphony of innuendo, his green eyes wicked and amused. "Making myself so at every opportunity is, I confess, very nearly my life's work."

She had a huge project to manage, which meant she had better things to do with her time than waste it on this useless, if shockingly attractive, man. Grace hated wasting time. That was the feeling that expanded within her, she told herself, threatening her ability to breathe.

"I'm sorry," she began, the polite smile she was known for curving her lips, though she knew her gaze remained cool on his. "I'm afraid I'm quite busy today. May I help—?"

"Why do I recognize you?" he interrupted her, languidly, because of course he had all the time in the world.

Grace was horrified to feel that rich voice of his wash through her, sending tendrils of flame licking all over her skin, coiling low in her belly. She felt it, and it panicked her. Surely she should be immune to this man's brand of practiced, cynical charm—she, who prided herself on being absolutely unflappable!

"I can't imagine," she said, which was a lie, but it was not as if she and Lucas Wolfe would ever speak again, would they? She could not fathom why they were speaking now—and why the cynical boredom she'd sensed in him in a chic and crowded hotel bar the night before had changed to something else, something dangerous and edgy. As if a dark fury lurked within him, just out of sight, hidden beneath his well–known and deliberately polished exterior.

But surely not. She was being fanciful.

"I know I've seen you before," he continued, his green eyes narrowing slightly as he looked at her, then warming as he let his all–too–practiced gaze drop from her face to skate over the figure she'd dressed in Carolina Herrera and other exclusive labels no doubt down–market to a man of his tastes. His lips moved, sensual and inviting for all they were cut, seeming to...suggest things. "You have the most extraordinary mouth. But where?"

Heat danced through her, simmering in every place his green gaze touched her: her breasts, the indentation at her waist, her hips, her legs. Grace was forced to remind herself that a man like Lucas Wolfe more than likely looked at every single person he encountered in that very same way—that the promise of sex and intrigue that seemed to heat his expression meant about as much to him as a handshake meant to anyone else. Less.

She felt a strange sort of echo sound through her, a deep alarm, reminding her of that naive girl she'd been so long ago and had sworn she would never be again. Not with another man like this one, who would render her just as pathetic and deceived as her poor, trusting mother. Who would destroy her whole life if she let him.

That was what men like this did. Simply because they could.

Grace knew that better than anyone.

"He's more than a bit of all right, isn't he?" the fashion buyer from Hartington's had cooed to Grace last night, when she'd firstseen Lucas—much drunker and far more disreputable than he appeared now, if that was possible—at an extraordinarily glamorous fashion show thrown by Samantha Cartwright, one of London's most beloved and avant–garde designers.

Mona had sighed lustily, gazing at Lucas from across the trendy bar as he'd flirted with Samantha Cartwright herself, oblivious to all the watching, judging eyes around them, Grace's among them. "And, of course, we're to treat him like a king should he so much as glance our way. Boss's orders."

Grace had nodded, as if she'd had the slightest expectation of interacting with the famous playboy, known as much for his devil–may–care attitude as for his long and illustrious string of lovers. Not to mention his much–discussed allergy to anything resembling work, particularly for Hartington's, who had been after him for years to take a figurehead position with the company as his equally disreputable late father had once done.

She'd felt a potent mix of awareness and disgust as she'd watched him. How could a man like Lucas, who was unabashedly making a play for the much older, and very much married, Samantha Cartwright right there in full view of half the city, also manage to seem so...alive and vibrant, in the midst of London's creme de la creme, as if he were the real thing and they were nothing but fluff and misdirection?

However, all his sexiness and charm had not prevented Samantha Cartwright's husband from expressing his displeasure at finding Lucas secluded with his wife sometime later—all over Lucas's pretty face.

The fact that she, personally, had had a strange moment, a near–interaction with this man, did not signify. He clearly could not recall it and she—well, if her sleep had been disrupted last night, what did that matter? It could as easily have been the espresso she should have known better than to order after dinner. It had to have been.

"I believe I saw you last night at the Cartwright show," she said now, and felt gratified when he blinked, as if not expecting that response. Grace smiled, razor sharp, and let her dislike for him—for all men like him, so careless and callous—flood through her. "Though I cannot imagine you remember it."

"I have an excellent memory," Lucas replied, his voice silky, and she had to admit that it got to her. It should not have affected her at all, the lazy caress of it, like bourbon and sin, but it did.

The man was lethal and she wanted nothing to do with him. 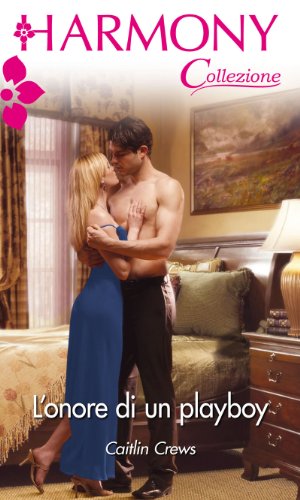 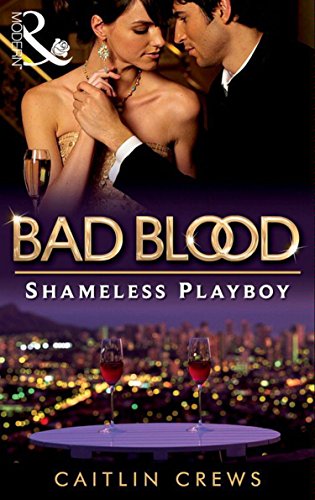 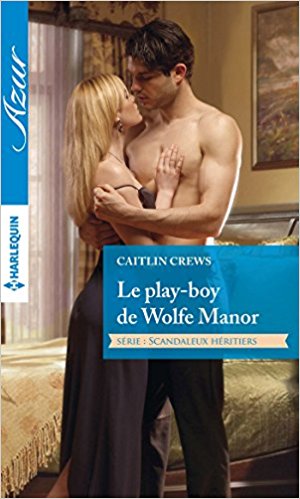 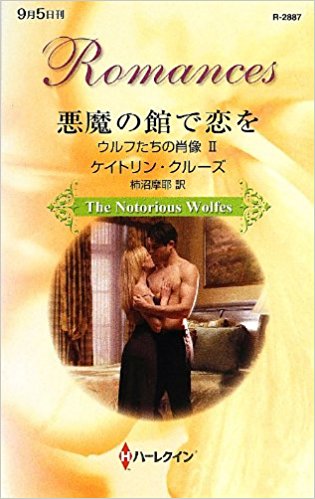 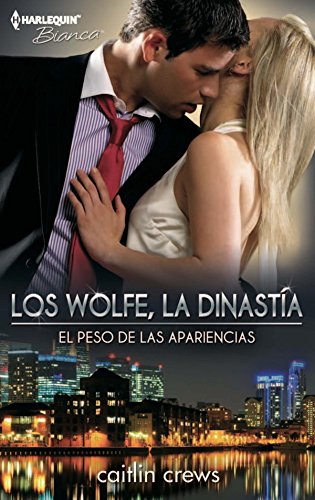 THE DISGRACED PLAYBOY made Jane Litte of Dear Author’s Best of 2011 list—at #4! She wrote: “Crews is fast becoming my favorite contemporary author. Within the confines of the category romance, Crews is playing around with tropes and challenging stereotypes. And how can you not love a book where the hero says ‘I am my own heroin.'”

Grade: B+ “I feel like there is great joy in the writing, even during the dark scenes as if these books are pure enjoyment to pen. There are so many great lines delivered by the characters.”

I loved this. …Lucas is lovely, Grace has a good reason to resist him, their relationship is tentative and complex and I was rooting for them all the way.

This is easily one of my favorite books of the year so far.

4.5 Stars! “Lucas is a multifaceted hero whose intelligence and wit are slowly revealed. It’s a welcome change of pace from alpha heroes who are unaware of their own roguishness, and the book is …shamelessly entertaining.”