This is part one of the four part serialized version of this book! 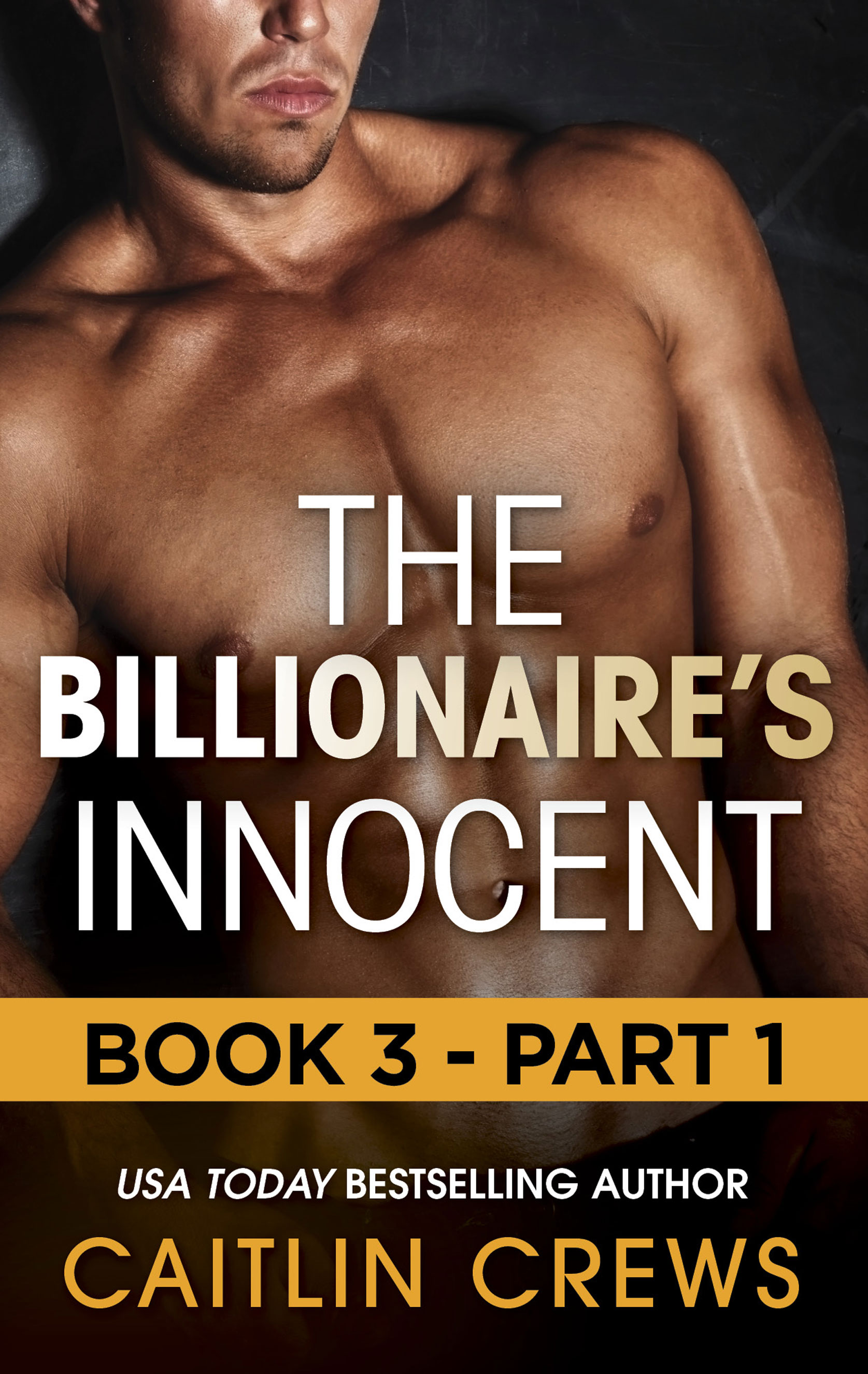 The Forbidden Series
Billionaires who can look, but shouldn’t touch!

For Logan Black, Jaiven Rodriguez and Zair al Ruyi, New York City is spread out before them like the Garden of Eden…and no one knows the sweet taste of forbidden fruit better than America’s most ruthless billionaires! Jaded and cynical, with a darkness that threatens to consume them whole, they think they’ve seen it all. But temptation has something new in store for each of them…

In Part One of The Billionaire’s Innocent, Nora Grant wants to make something of her life, but she doesn’t realize it will lead straight to billionaire prince Zair al Ruyi. Beneath his polished royalty, Zair has warrior’s blood running through his veins, and he’s found his next conquest! 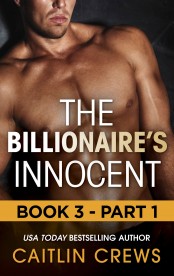 Zair al Ruyi walked on to the yacht like a nightmare come to life and Nora Grant’s first, stunned thought was that she was hallucinating. She had to be, because he couldn’t be here.

Not Zair. Not here.

But it was still him and he was still there in the entryway—his security guards flanking him as he stole all the air from the intimately-lit, sunken lounge with the French sea glittering in the moonlight outside the windows, wearing a hard smile and shaking the smarmy host’s hand—after Nora clamped her eyes shut and then opened them again. After she pinched herself savagely on her own mostly-bare thigh, hard enough to leave an immediate, purple bruise.

He was still there and he looked as relaxed as a man like Zair ever did—maybe more relaxed than Nora had ever seen him. He appeared to be utterly at his ease, in fact, like all the rest of the enormously powerful, extraordinarily well-connected men indulging in this very high-priced evening on an especially extravagant luxury yacht off the coast of Cannes, France.

You don’t know what you’re asking, little girl, he’d told her six years ago on what had been, until now, the worst night of her life. He’d been very certain. His dark green gaze had left marks. Swim back to the shallow end before you drown.

“Prostitutes and punters,” one of the other girls said beneath her breath from beside Nora, which diverted Nora’s attention from the entryway. “A match made in heaven.”

“Lucky us,” Nora replied with a smoky sort of laugh, the way she would if she really was the jaded party girl she was pretending to be tonight.

She expected that when she looked again, it would be some other dark-haired man prowling there in the doorway. That her mind had conjured up Zair because he was, truly, the worst person she could imagine seeing in a place like this, outside a member of her own family.

But when she turned back, he was still there. Still Zair al Ruyi, the bane of her existence. The only man who had ever turned her down, and emphatically at that. The last man she’d ever want to see under normal circumstances, which these were not. Still hideously, horrifyingly real and right there besides.

And, because he was Zair, he was far more beautiful than the rest of the assembled punters no matter how much money or fame they had at their disposal. He was dangerously magnetic and impossible to look away from, like he’d created his own vortex simply by entering the room. He wore one of his exquisitely-crafted, bespoke dark suits with his shirt collar open at the neck, exposing the strong column of his throat and the suggestion of his sculpted chest below. He took the drink one of the stewards handed him with a hint of his usual athletic, martially-trained grace. He laughed that same velvet scrape of a laugh that had always made Nora’s stomach flip no matter how many times she told herself she disliked him, and tonight was no exception, despite the circumstances.

This really is a nightmare, Nora thought in deepening horror as one moment became a handful, because he didn’t appear to know she was there. And that meant he was in this place of his own volition. It meant he was a guest, come to sample the women assembled for the taking and pick out his favorite, just like all the rest of them.

He’s one of them.

And that meant Nora didn’t know Zair at all no matter how many years he’d been in and around her life, because no matter how much she’d claimed to hate him since that humiliating night after her eighteenth birthday party, she would have said it was impossible he could be involved in something like this.

She had said exactly that.

Gorgeous, mysterious, impossibly sexy Zair of the cool green eyes, jet black hair, and that body Nora knew was all lean muscle and fighting fit because he’d learned how to defend his country with his hands before he’d left it when he was eighteen. He couldn’t be one of these disgusting men, she thought then with no little desperation. He couldn’t, because he was one of her older brother Hunter's best friends from college.  He was the ambassador to the United States from the very wealthy sultanate in the Middle East his own, much-older half-brother had ruled for the last decade. More than that, Nora had adored him. Right up until the night he’d rejected her so emphatically.

He can’t be one of them, she thought again, fiercely.

But he was here. And the fact that a man she knew—a man she’d touched with her own hands, danced with and eaten meals with across the years, a man she’d once begged to kiss her and more—could be a man like this was like a kick.

Hard. Right in the stomach.

And then he saw her.

Those deep green eyes of his that had always seen straight through her found her across the outrageous lushness of the yacht’s vast lounge area, across all the pretty girls vying for the attention of the wealthy clientele, across the laughter and the flirting and the increasingly lewd displays to where Nora sat on one of the low sofas.

Everything stopped for a searing, shattering, horrifying instant. The night. The world. Zair froze where he stood, his storm cloud eyes as hard as steel and something like unforgiving on hers despite the dangerous smile still stamped on his uncompromising mouth.

His gaze moved on in the next breath, slid past her and onto the rest of the smiling and preening girls displaying their wares in a number of alluring poses, like Nora was a stranger. Like she was no more than an interchangeable thing for sale and nothing more to him than that.

Which, of course, she was.

Her heart slammed against her ribs with a vicious wallop, so hard she felt dizzy and sick at once and worried she might faint right there on the gold and navy nautical carpet, and Zair walked deeper into the vile little gathering like he belonged there. He was welcomed as if he did, as if all the revolting people here already knew him well. It didn’t make sense. She couldn’t let it make any kind of sense.

She couldn’t accept—she refused to accept—what it meant that he was here. It was bad enough that she was.

It was bad enough that she'd come to Cannes on a kind of lunatic kamikaze mission on the first place, especially when there was a possibility that the unconcerned British police were right and her missing friend Harlow might not even want to be found after her disappearance from London a few weeks back.

There is the distinct possibility that Ms. Spencer has merely done what many young women do on their first trip abroad, the impatient British detective had said when she’d contacted him. There is almost always a foreign lover and a last minute adventure she’d rather not share with anyone back home. I rather doubt she’ll appreciate all this fuss when she turns up.

But possibilities weren’t enough for Nora. Not when it was Harlow.

It wasn’t until a CCTV picture had surfaced showing Harlow entering Nice, France with a grim-looking stranger—hardly the lover everyone seemed to think she’d taken, not with that merciless grip on her arm—that Nora had been sickeningly sure she knew exactly what had happened.

Harlow had written her undergraduate thesis on human trafficking and then, thanks in part to her friendship with their sorority sister Addison Treffen and in part to Nora’s merciless prodding that she do something with her life—not that Nora had taken her own advice—she’d accepted a prestigious law internship at Treffen, Smith, and Howell’s London office as a first step toward the kind of world-saving work she’d always said she wanted to do. But then the Jason Treffen scandal had broken a few months back and Addison’s father had been exposed as the leader of a high class sex ring he’d operated out of his New York City law office, making him responsible for all manner of appalling things—including the death of Nora’s brother Hunter’s college girlfriend. Now Jason was dead, shot by an unknown assailant who’d never been found right in front of poor Addison, and Nora knew there was no way Harlow could possibly have resisted poking her nose into things in that London office. Because if it was anything like the office Jason Treffen had run in New York…

All it had taken was a simple internet search on “sex trafficking” and “the south of France,” and Nora had found a wealth of unsavory information on the “yacht girls” who swarmed Cannes during the famous annual film festival to ply their trade on the yachts that dotted the Cote d’Azure bays and the Mediterranean Sea beyond. The yachts, the boulevards, the upscale, breathlessly opulent hotels that lined the iconic beaches, and the airy villas high in the hills. Some were prostitutes, some were down-on-their-luck actresses looking for cash and a way back to the bright lights of Hollywood by any vehicle possible, and still others were bored socialites simply out for a good time with a bit of rough and some pocket money besides.

Nora would have bet anything she had that Harlow was headed there. Which meant she needed to do the same, because she knew what no one else did. What she could scarcely admit even in her own head.

This was her fault.

Which made fixing this, by any means necessary, her responsibility.

She watched Zair stop and talk to a pair of very elegantly dressed twins on the far side of the lounge, both of whom giggled at his brooding attention. He gazed down at them in that hard, leashed-danger way of his that made her chest feel tight. Except she knew she shouldn’t let it.

He wasn’t flirting with them. He was inspecting the merchandise.

I can play whatever game you want, she’d told him on her eighteenth birthday. A desperation unlike anything she’d ever experienced before had swamped her as she’d stared at him out on that dark terrace with Manhattan at their feet, making her feel drunk and unsteady, when she’d been neither. I can do anything you want me to do.

Zair had watched her with that same expression on his face. Harsh. Predatory. Knowing.

Is that so? Anything is a big word, Nora. It covers a multitude of sins.

So can I. She’d thought she sounded sultry. Tempting.

The kind of sins I like leave marks, he’d told her. You don't know what you’re asking, little girl.