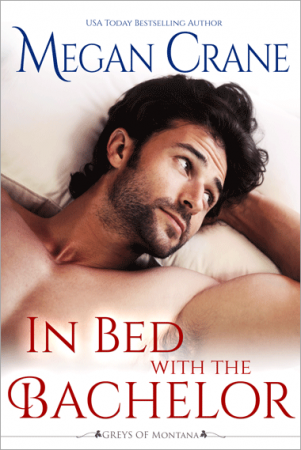 In Bed with the Bachelor

Part of the Greys of MontanaMontana Millionaires

Our latest bachelor has enough family in Marietta to qualify as an honorary native, but hails instead from Seattle, WA, which is where he’ll fly you for a glamorous weekend on the shores of the sparkling Puget Sound.  Jesse Grey will treat you the way a local boy turned construction tycoon should: five star accommodations, gourmet dinners, and celebrated Washington wines.  We just can’t promise he’ll smile much.  Or at all.

Sold to the highest bidder!

Jesse Grey, notorious bachelor and one of Seattle’s foremost construction tycoons, has been roped into participating in the Marietta Bachelor Auction thanks to an expertly executed guilt trip laid out by his family.

Michaela Townsend already has a fiancé and certainly doesn’t need another man in her life. So when her family buys her surly, sexy Jesse at the auction and wrangles him into driving her from Montana to Seattle, she’s appalled yet disturbingly attracted.

As far as Jesse is concerned, Michaela is forbidden fruit. Even though he knows her fiancé isn’t all he seems, Jesse would never take what didn’t belong to him. But how long can he resist the one woman he shouldn’t touch?